skip to main | skip to sidebar

from the mind of Wilson

People down in the south of Louisiana (I say south as in Golden Meadow so far as Grand Isle) are a breed all of their own. Most of them still speak awesome old fashioned Cajun French. Most of them spoke only French as children. Listen to their accent when they speak and you hear French in their English. You know it's true when you pull over to the side of the road to ask a construction worker directions and his accent is so thick, you assume he must speak French, so you ask him and find out that he speaks better than any highschool French teacher you ever had.

There is nothing more hoaky and dissatisfying than hearing a Cajun song that was originally written in French being sung in English. It's even worse than someone singing in faux-French who doesn't make any sense whatsoever to the point where, if translated, one would understand: "You left yourself, for my going away, going away to join you. Eat my heart, baby, I'm going to bury you, come see me, you're going to go far to me."

I have no problem with the English language, of course, but I think if you take a good old song like "J'ai été au bal" and sing it in English, you sound stupid and should be slapped, or at least beaten with a big stick. And if you're going to sing it in French, do a favor to all your ancestors and at least sing some words that make sense to all the people who still speak French. Don't go to La Poussiere and sing that shit to the old timers. They will punch you in the face.

This is an amazing edit of the famous Tennis Match between Thomas and Steve Riley.  I forgot what actually happened during the match, so I filled in the blanks in my head and pumped out this video!  Enjoy
at 9:15 PM No comments:

A map of where we will be going in the Middle East.  I think we will have the chance to go to Dubai in the UAE, which would be a thrill of mine.  More to come. 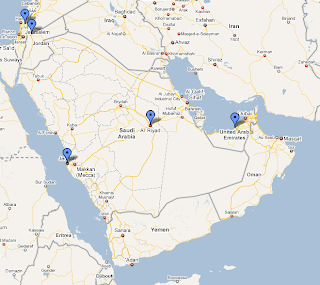 This video shot by Brandi Putnam Laiche @ Whiskey River- watch as Thomas David totally shreds the accordion on stage.
at 11:32 AM No comments: